When I learned about the papal visit several months ago, I honestly did not pay too much attention to it. I admit, I was too preoccupied with work. My mom even asked me to book a hotel near Rizal Park, where Pope Francis held his concluding mass. Yes, I regret not paying attention to my mom a few months back. I crammed a week before, but obviously, there were no rooms available in nearby hotels anymore. The day before Pope Francis arrived, I was having mixed emotions- excited (for his visit), agit (for not knowing what to do to see him), helpless (because I feel I do not have the chance to see him considering the millions of people who would go out of their way just to catch a glimpse of Pope Francis).

Let me share a quick story why I really wanted to see Pope Francis. Back in 1995 when Pope John Paul II visited Manila, my family and I joined millions of people at Rizal Park to celebrate World Youth Day. I was young. I didn’t care much. I didn’t understand what was going on. All I wanted at that time was to go home – that’s what I remember. One night, on our way back home, we noticed several cars parked along EDSA Mandaluyong. My mom told my dad to stop as well, thinking Pope John Paul II’s popemobile would pass by. I didn’t even want to go down the car because I was too sleepy. My mom had to drag me and cross EDSA to go to the center island. A few minutes later, the popemobile was nearing. It was the longest 3 seconds of my life. I was waving at Pope John Paul II and called his name. He looked at me and did the sign of the cross. I suddenly felt tears rolling down my cheeks. I saw my dad, mom, and sister crying as well. As we walked back to the car, I was still having goosebumps. The feeling is just unexplainable. I can clearly remember every millisecond of that encounter with the pope. The joy in my mind and in my heart is beyond imagination that I couldn’t even express them into words. Whenever I try to describe that feeling, it’s always an understatement. Some of you may be puzzled already, but I guess those who had the same “moment” with the pope would understand. Even I can’t explain it. And believe it or not, I’m crying right now as I write this down. That 3 seconds gave so much impact in my life and in my faith. This is the reason why I wanted to see the pope again. Every time I visit Vatican with my family, I’ve always wished the pope would look out of the window even for a while, which he does from time to time. 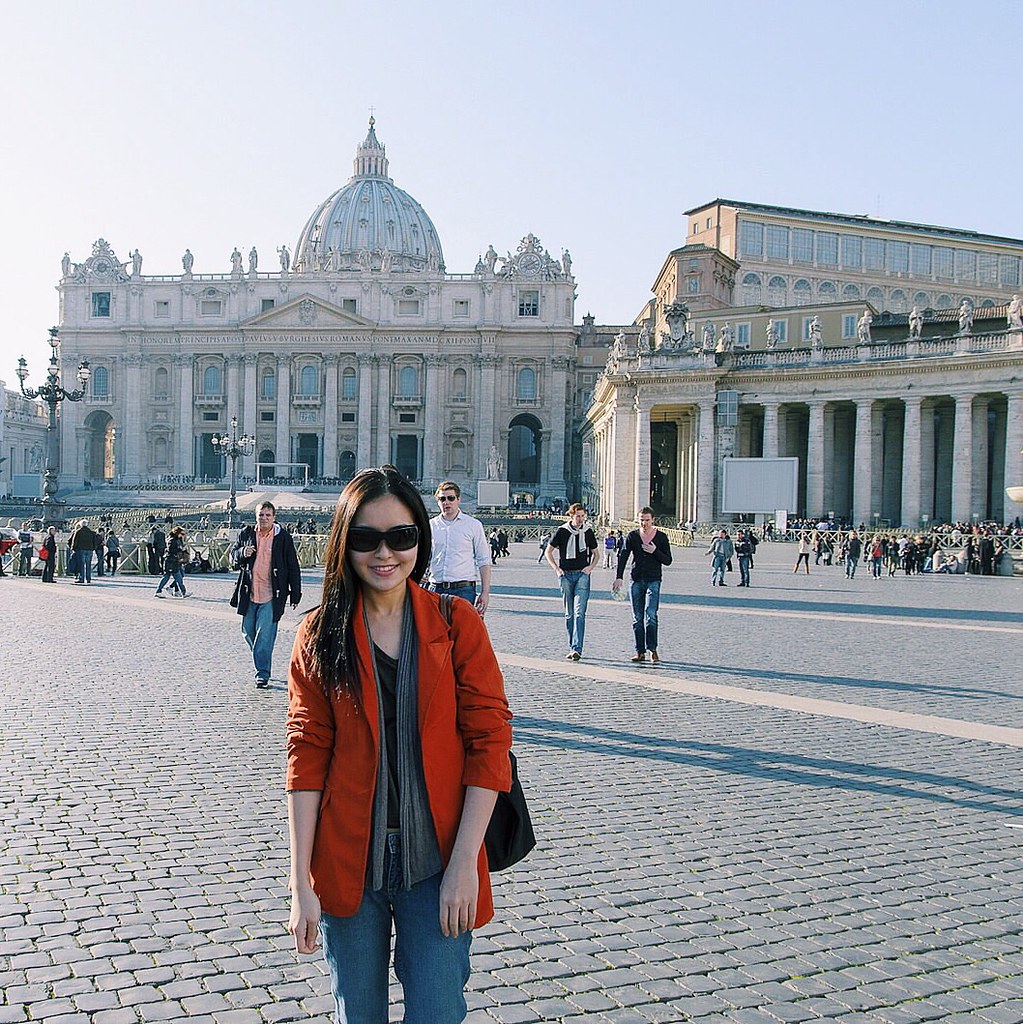 On the day of Pope Francis’ arrival, my eyes were glued to the television. The moment he stepped out of the plane, I had goosebumps and felt my tears starting to form in my eyes. I was then decided to see the pope. On his second day, I waited along Roxas Boulevard, where he would pass by going to Mall of Asia Arena for the meeting of the families. My friends who got a room in one of the hotels along Roxas Boulevard invited me to come over since they were able to see the popemobile from their room the night before. Although it would have been great and hassle-free, I still wanted to see the pope upclose. It also feels different to be part of the excited crowd. 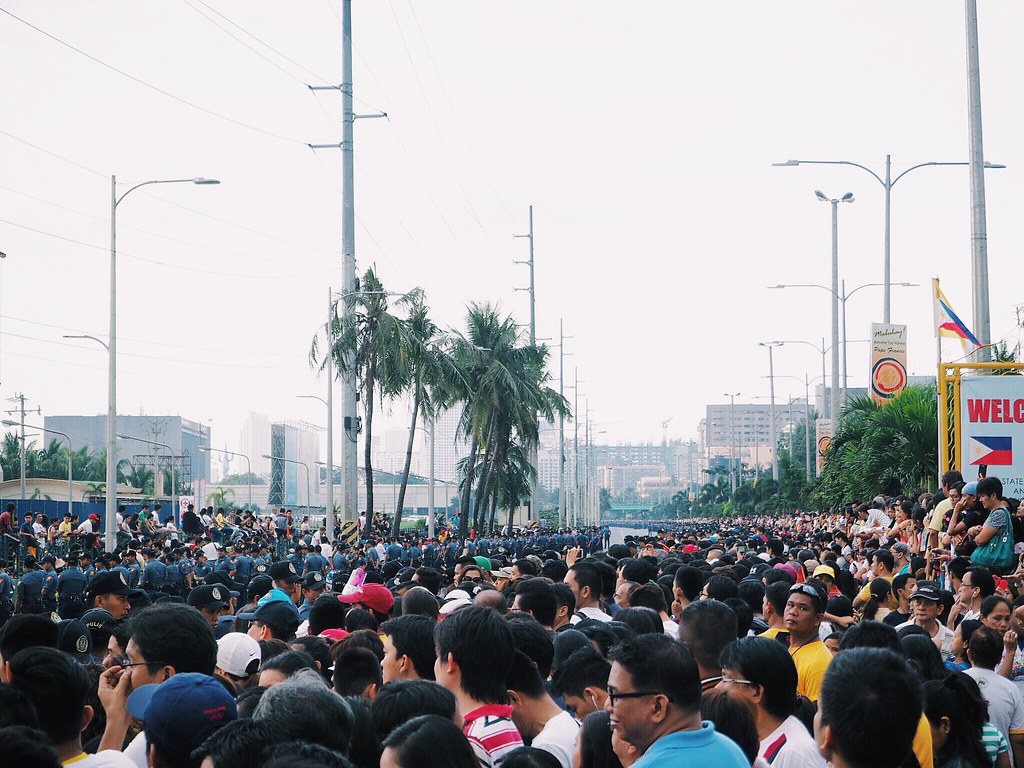 Well, the wait wasn’t so bad. After an hour of standing and anticipating, I finally saw Pope Francis. It was very quick, something I really didn’t expect. If you saw the speed of the popemobile on television, it was faster in person. 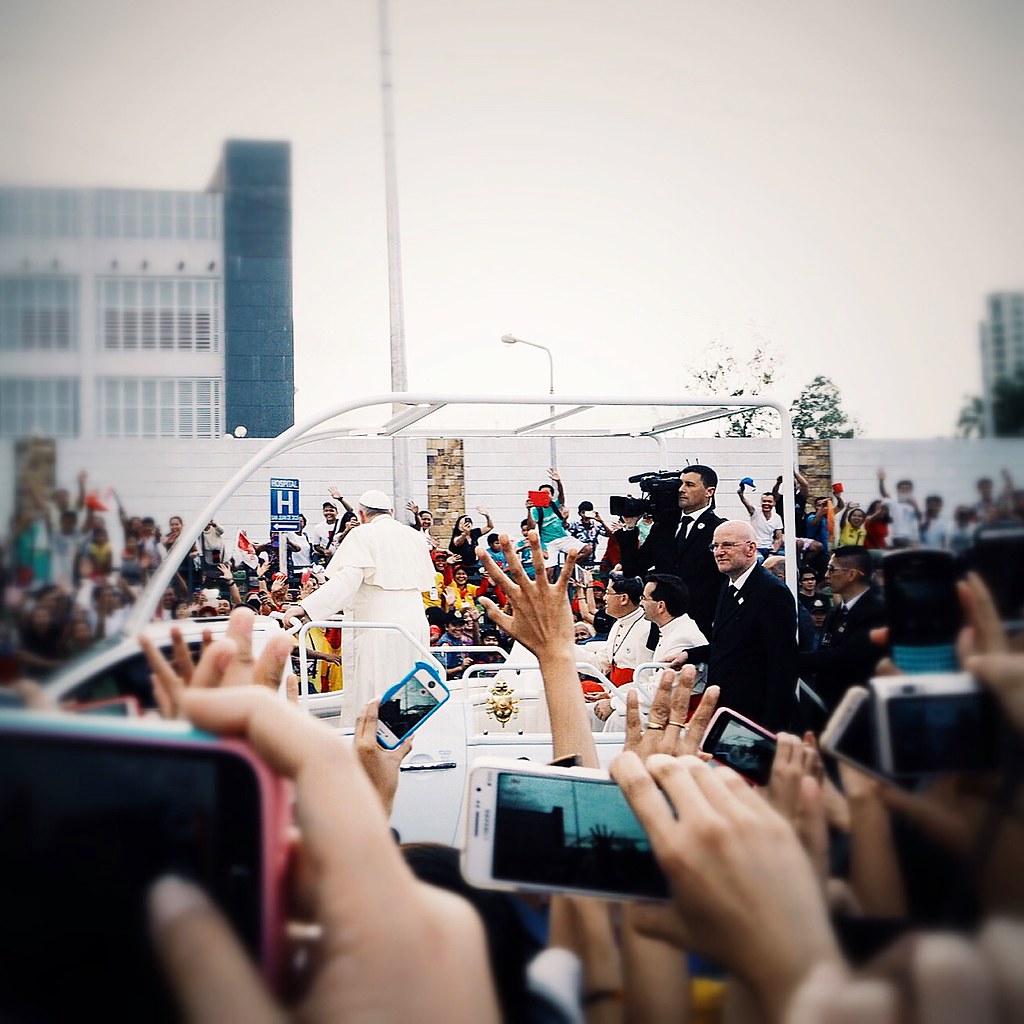 Still, I had goosebumps even if I just saw him for two seconds. Oh, I wasn’t even able to cheer for him. I was quiet the whole time trying to savor the moment. It was a very quick encounter, but a very meaningful one for me. 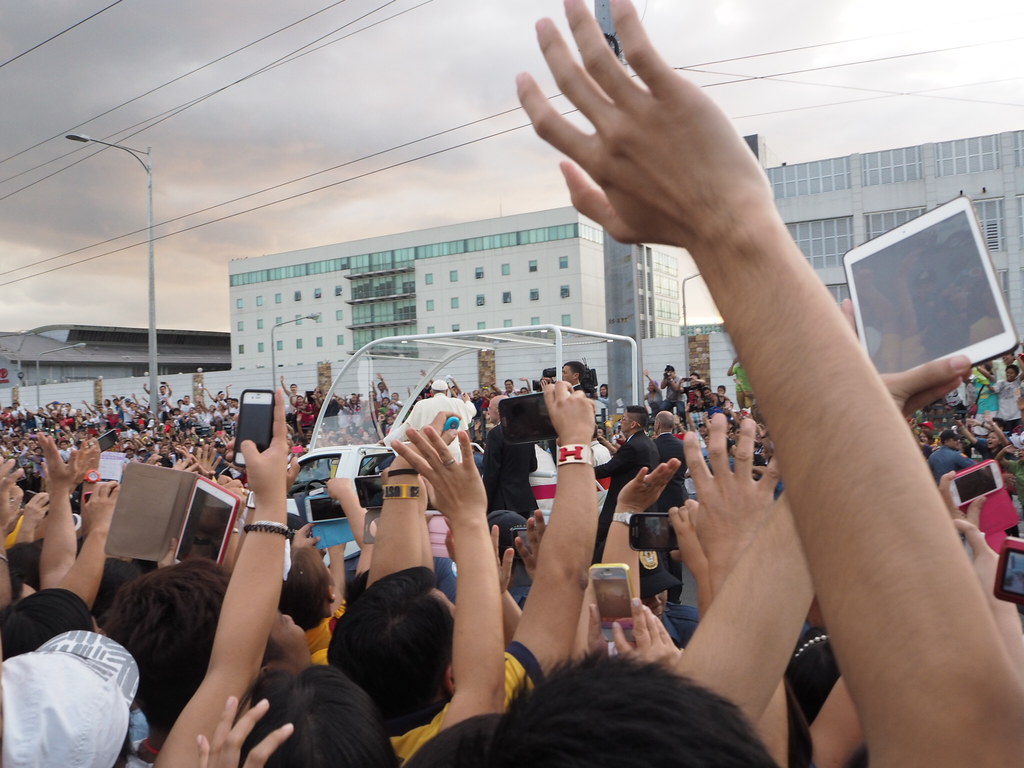 The night before his concluding mass at Rizal Park, I was having mixed emotions again. There’s a feeling of contentment that I saw Pope Francis, but I was also uneasy. I really wanted to attend the final mass of the pope at Rizal Park. And so I did. My family and I left the house about 10am already and we were so lucky to get a parking slot along Roxas Boulevard. It was a looong walk though, but we didn’t mind. Oh, and it was raining. We didn’t bother bringing umbrellas anymore. We wore our raincoats and started our looong walk. We stopped at Quirino Avenue intersection. There were a lot of people waiting for the pope to pass by. We decided to stay there as well to catch a glimpse of Pope Francis again. We were able to get an elevated spot under a tree. We held on to our spot for more than two hours despite the strong rain and wind. Seeing the pope even for just 2 seconds was all worth it. Again, I’m left speechless. 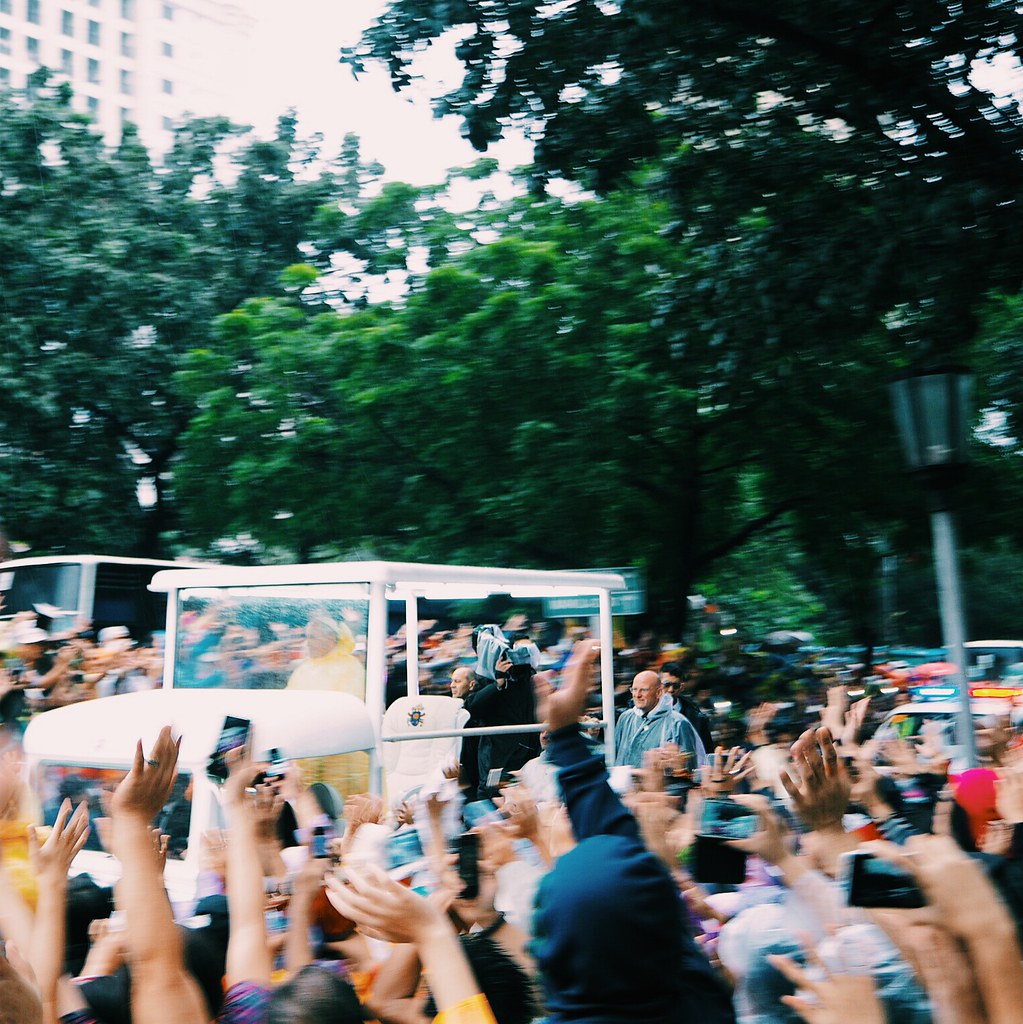 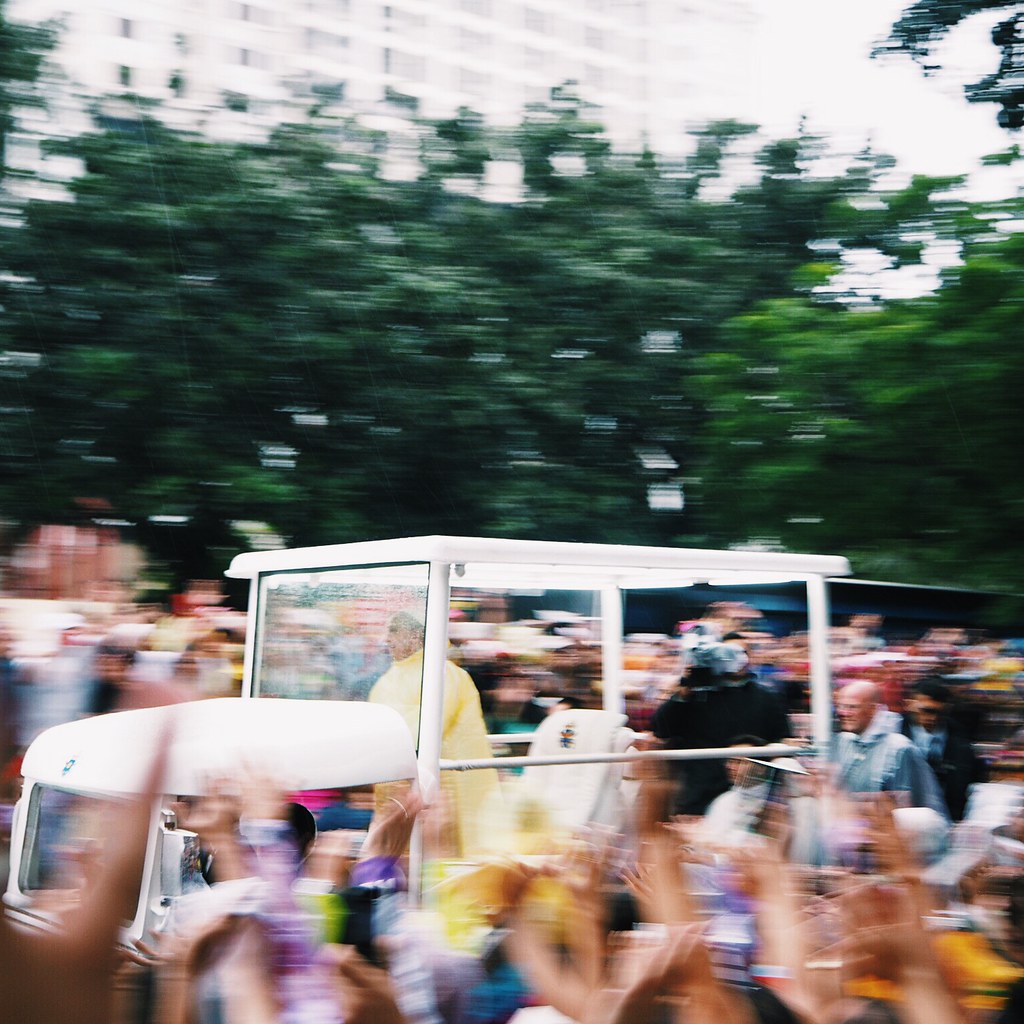 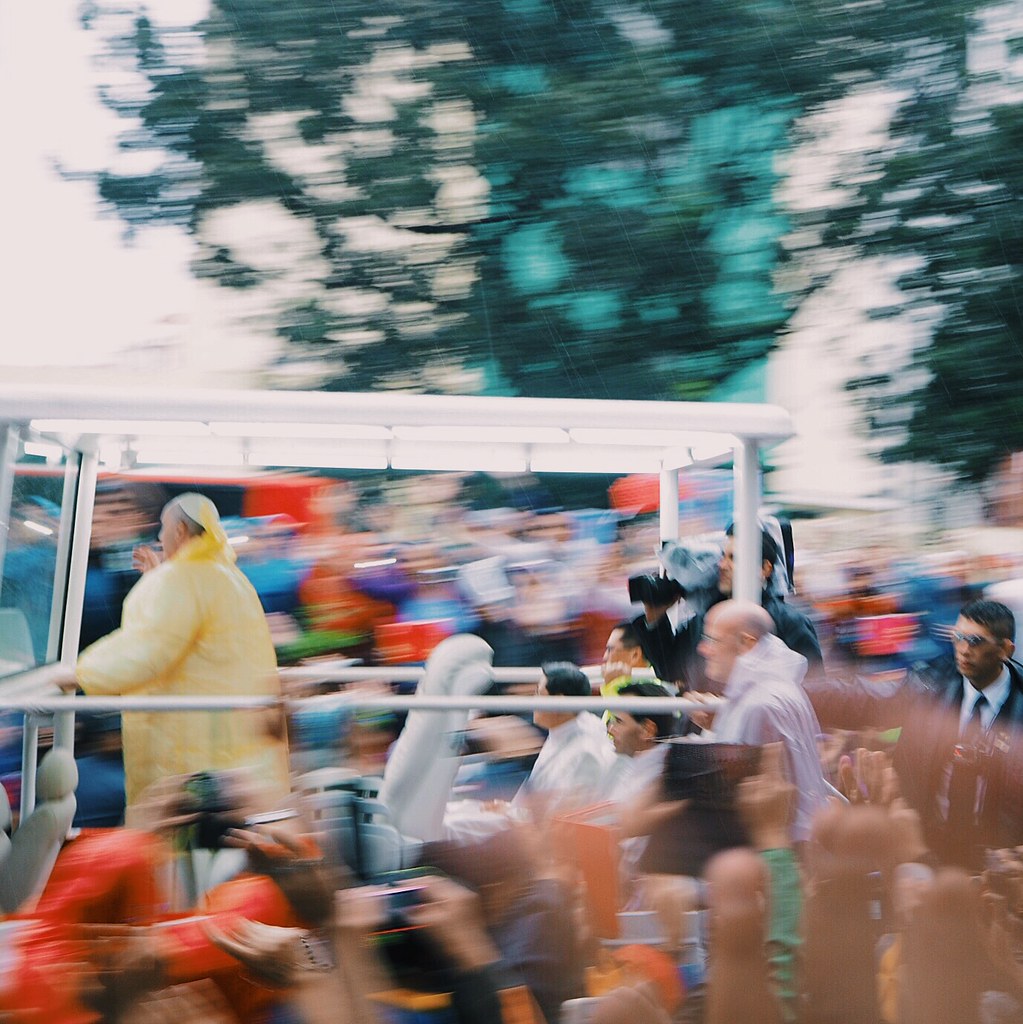 There’s something with Pope Francis that makes me feel so alive, blessed, and loved. His mere presence makes me feel so secure and leaves me at awe. His holiness, his aura, his infectious smile, his actions, his words – everything’s just so genuine. I believe, the yearning of the people to see the pope is not a form of idolatry. In my experience, the pope’s presence actually reminded me to strengthen my faith and to cling on to God. 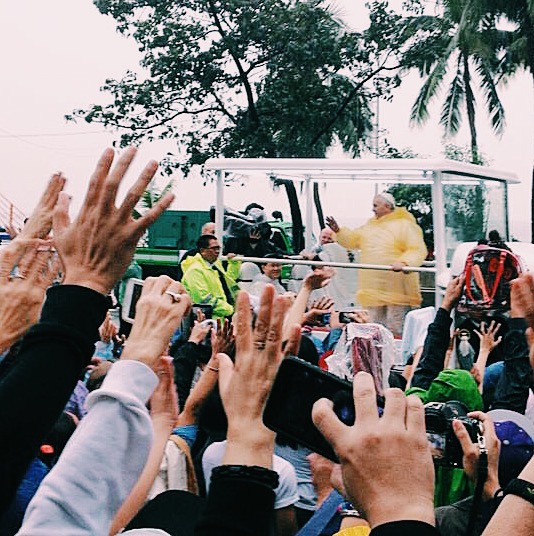 Let me end this long post with an excerpt from Cardinal Luis Antonio Tagle’s speech to Pope Francis after the mass at Manila Cathedral. “You bring fire, not to destroy but to purify. You bring an earthquake, not to shatter but to awaken. You bring weapons, not to kill but to assure. Indeed, “you are Peter, the Rock upon which Jesus builds His Church” (Matthew 16:18). You are Peter who comes “to strengthen your brothers and sisters in faith” (Luke 22:32).” I couldn’t agree more to what Cardinal Tagle said. I think Pope Francis’ visit somehow awakened the people’s faith. Thank you Pope Francis! Thank you Lord!

Looking Back and Welcoming 2013